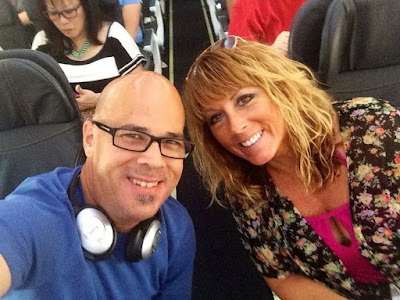 Two months ago today, on July 18, 2015, my friend and long-time teaching assistant was killed in a tragic accident. After teaching the first day of my seminar in Des Moines, Iowa, I received a text from a friend in Olympia asking me to call. She told me that she heard a rumor that Charity died in a freak sporting accident earlier that day.  I was 1,800 miles away but confirmed it with Charity's sister, Coral. She didn't make it.

Charity had always come with me to Iowa, but this time she stayed home and competed in the Wilkeson Handcar Races in Pierce County.

The Olympian Newspaper covered the story and then KOMO News called and wanted to talk to me about Charity.  While the cameraman was setting up, I spoke with the reporter off-camera about his previous interviews that day. I won't share here, and really don't want to share with anyone about what told me with me about the details of Charity's death, but it was horrible. I cannot fathom what her husband experienced as he tried to hold Charity together in her last moments of life after she was run over by that 1/2-ton handcar. Charity was a strong, energized and amazing woman who was the definition of health. The fact that she's dead makes no sense to me.

If a year ago I told you that one of us, Charity or myself, would be dead, everyone would assume it would be me. Right? But why wasn't it me? Why do I get to live and she is gone? It's hard to write with the tears running down my cheeks and I'm filled with emotions as I write this. Anger, hurt, disbelief and sadness.

I've said those words before in this blog, "Why not me." In that post I was referring to people always saying, "why me?" when they face adversity. A certain percentage of people will deal with a given malady, for example, and when we say "Why me" when something happens, we are really saying that someone else should have to have the sickness or turmoil that you are facing instead of you. Charity dying seems senseless. Why not me?

I've been quiet for a while on this blog, but much has been happening.

Probably the biggest part of my unreported journey is the pain I've been dealing with. The first wave has been going on for the past year and a half in my face, jaw, neck, shoulders. It never stops, but it does get worse occasionally. An MRI recently showed a bone spur growing in my neck in response to the cervical radiation. Nothing really helps bone spurs and in the neck, surgery isn't an option.

The aspect of the pain has been from the waist down. Apparently the combination of cervical radiation with the specific chemotherapy I was given, Cisplatin, causes a neurological condition called "Lhermitte's Syndrome, which is an electric shock-like sensation in the spine and extremities exacerbated by neck flexion."

I didn't realize that what I experienced was from my treatment until a woman in the Seattle area heard my followup story on KOMO TV4 recently and told me of her similar experiences. She mentioned the "buzzing" down her legs and we started conversing about it.

From the first time I started eating by mouth again after my chemotherapy and radiation in December of 2013, I have been getting a sharp, shooting pain in my jaw from the instant food hits my mouth which lasts about 60-seconds. The pain has been slowly increasing and has come to a crescendo in the past few weeks. It is overwhelming at times. For you anatomy buffs, it is located about 1.5" anterior of the ramus on the left side of my mandible. There has been a swelling at the site as well.

I had my ENT examine it as well as my dentist. X-rays and a CT scan excluded cancer, but they found a complication from my major surgery in October of 2013. They confirmed that the arm tissue that was sewn into my remaining tongue tissue is anchored a bit too well. It seems to be pulling my gum away from my back left molar, revealing the root of my tooth. The dentist had a nifty camera that showed me what was happening and even emailed me the photo. I won't post it here.

Trying to rebuild and run my business while conducting seminars nationally is time-consuming enough, but trying to squeeze in what will likely be two oral surgeries complete with tissue and bone grafts while continuing to speak publicly seems like a bit of a challenge. Good thing I have family and friends praying for me.

In all of this I have had the amazing opportunity to meet others with my condition because of this blog. I am not alone. I feel blessed to have been able to encourage two young women who have had the surgery in the past couple of months. What they are enduring post-surgery is nearly identical to what I experienced. As a matter of fact, if you are reading this and you are facing a hemiglossectomy or have had one, please friend me on Facebook. I would love to be in contact with you be an encouragement however I can. Specifically, I am really looking forward to meeting a young elementary school teacher and her supportive husband when I am in New York City this next month.

This journey has been hard. I try to stay strong for my daughters because I don't want them to worry about me. They have so much living to do and worrying about "what if's" when it comes to my health isn't healthy for them. In the movie, Insurgent in the Divergent series, the protagonist, Tris, has a virtual conversation with her mother about her bravery. Her mother says, "You are brave... braver than anyone." Tris replies, "I'm not brave mom. I pretend that I am, and I want people to think that I am, but I'm not. I'm really, really scared."

Those words hit home to me when I heard them. I actually broke into tears because they are exactly what I've been holding deep inside. Then I realized that bravery isn't in hiding our fears. Bravery is what we do when faced with our fears. You can still be brave with tears running down your cheeks. One of the bravest men I've read about was Winston Churchill. He is often quoted as saying, "Never, never, never give up", or some variation of that. According to the Churchill Centre, what he actually said in a speech was made October 29, 1941 to the boys at Harrow School was:


"Never, never, in nothing great or small, large or petty, never give in except to convictions of honour and good sense. Never yield to force; never yield to the apparently overwhelming might of the enemy.''


To Charity's husband and daughter, I leave you with Churchill's words. The loss you feel which far exceeds my own will come in waves as it has with me. Periods of strength followed by raw weakness and utter sadness.

Churchill's advice is incredibly spot-on regardless of what enemy you are facing. Whether that enemy be fear, depression, pain, loss or broken dreams. Never give in to it.